Is this another Bitcoin driven scam? Within this Bitcoin4U Biz scam I want to give you the ins and outs of what this digital currency type program has to offer.

With everyone and their mothers trying to scam other people with the hype Bitcoin brought many years ago, I hope this review can save at least some of you from giving into something you will most likely end up regretting.

I like to debunk these so-called “make money online opportunities” and find out whether or not they are legit or a scam and this Bitcoin4u system is no different.

Obviously you put some serious thought into joining this site and I’m glad you did your research.

Most people join a program without getting the facts and then find themselves looking for the next best thing.

You’ll learn a lot within this post, so read it to its entirety as it won’t take much of your time.

The domain “Bitcoin4u.biz” has been registered since the 1st of August, 2016. While there is no way to find out who owns this website either, since they have set everything to private.

This is never a good sign and most of the time it means they have scammed people before and don’t want to be exposed again.

OR they plan on scamming – and there’s a good chance it’s on this website.

According to Alexa, a large chunk of their traffic is coming from India and I’m going to take a wild guess here and say the owners are probably operating this site from India as well.

So after some thorough research, it seems that Bitcoin4u is a cash gifting scheme. Every transfer and currency on this website is in Bitcoins, so you won’t be using any real money here.

Basically, there is nothing to sell on the website (retail products or services), but you are able to promote the affiliate membership, and this is where the money is made. Well Bitcoins for that matter.

When you join Bitcoin4u, you have the option of gifting your sponsor (the person who you signed up under).

Which brings me to my next point – the compensation plan. That is the sole focus of this website and there is nothing else that it offers.

The compensation plan is the main focus of this system. You invite people into the same system you just joined in the hopes that they will become a paying member just like you did.

When your downline invites people and they pay money too, you’ll start earning more and more Bitcoins.

So basically, you start off at the bottom of the list when you sign up and after you make your first gifting payment (10 Bitcoin payments of 0.002 each), you move up 1 position.

You HAVE to make 10 payments before you are able to participate in the compensation/affiliate plan, which I find to be a bit much.

Keep in mind: 2 of those payments go to the ADMINS of the website :/ That’s correct. The owners will ALWAYS be at the top of the list. And that’s with every member that joins, not just you.

Something Fishy Going On

So they keep mentioning that their system IS NOT an MLM system, nor is it a chain program or pyramid scheme.

They are simply running a cash gifting scheme, and they claim it is 100% legal.

However, you and I know that cash gifting schemes are by no means legal whatsoever!

Furthermore, they try to ensure you as much as possible that it isn’t a scam and they aren’t running a fraud either.

They put an emphasis on Bitcoin4u being 1000% successful!

Since they’re running something completely illegal, they are using Bitcoins to avoid it being tracked back to them, and having a private registration just goes and proves it!

They are clearly funneling money into their bank accounts as we speak and laughing hysterically while they’re at it.

And that’s why when the company collapses, the admins would have made all this money and everyone that joined would have got fooled into their BS system.

Now you know they are running a cash gifting scheme, what happens from here?

They will keep the system up and running until they get exposed and recruitment slows down – because it absolutely will eventually.

When recruitment comes to a halt, they’ll shut the entire thing down and run away with everyone’s money.

They’ll more than likely start up another company – with the exact same business model, just a different name just like everyone else.

And that’s exactly why they have their website set to private and using an untraceable currency, so they can keep running the same type of scam over and over again.

Still want to give Bitcoin4u the benefit of the doubt? You can get access to their system by going to their official page: www.bitcoin4u.biz.

To make your money back, you’ll have to keep recruiting members, and it will have to be a lot as well. Because not everyone is going to start paying.

What I don’t like is that you have to invite 10 members, ones that will actually start paying before you can begin profiting and making your money back.

If you’ve ever done any type of network marketing you will know how hard it is to get people to join even if you have an actual product to offer.

Overall Rating: This is not the first of its kind and it is designed to have people promote this site so that they can make money. This is not going to make you a millionaire, so please be smarter than most.

So is Bitcoin4u a Scam?

Even if the owners did come forward and admit to the type of operation they are running, this thing will still be a scam.

Getting other people to join something without offering any value is not legit and should not be promoted so if you feel obligated to promote something because you’ve already paid it’s time to cut your losses.

I can promise you that this site will not last and although a bunch of its members will stand behind them due to the fact that they put money into it, this whole scheme will come to a screeching halt.

Keep your Bitcoins in your wallet and please do not feed this scheme like many other people are already doing. 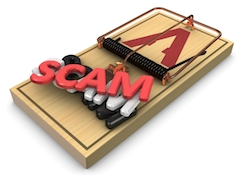 I have been in your shoes before and as much as we want every program that we join to be “the one” it’s usually not the case.

Especially if you’re fairly new to the online world and don’t really know how it works it is too easy to believe what anyone says.

There are are literally thousands upon thousands of sites like this out there and yes we can make money with them (when people join) but that’s the only way it can be done.

If you are looking to make real money online the real way, you need to create your own business, sell other people’s products, and scratch the whole recruiting nonsense.

I have given away a lot of money to these scammers and if it wasn’t for a program called the Wealthy Affiliate, I’d probably still be doing the same exact thing.

Quit falling for scams like Bitcoin4U and do understand that making money online is going to require you to put in some actual work and not recruiting.

If you can’t understand that much it can very well be possible for you to make money online.

Other than that, you know exactly what you will be doing if you join Bitcoin4U, so you have no one to blame but yourself if you end up losing your money.

Thanks for reading this Bitcoin4U review and hopefully I have given you a view of the bigger picture so that you can make a wiser decision than most.

Ibotta Review – Savings and Coupon Scam?
Next Post: How to Make Money Vlogging – The Right Way