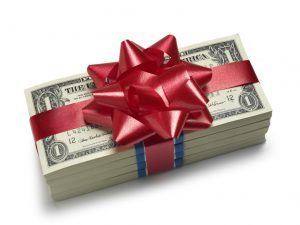 Some people question whether or not cash gifting is legit or a scam, when the truth about this nonsense says it all. Whether you want to call it a scam or not, still doesn’t change the fact that it is not a real business.

Giving money to someone and having them do just that is not a business. Do you think I’m going to get a business license for my new cash gifting opportunity?

The things that the owners of these scams have done is what keeps them afloat, but it doesn’t change the fact that you are not guaranteed anything and you are not running a legitimate business.

So What in the World is Cash Gifting?

Nothing more than giving money to one person hoping that they or another person would return the favor. These types of programs were very popular in the early years of the internet, but after a clear understanding of what they really are, they are now considered illegal.

The first cash gifting scheme I got involved with was by a dude named “Q” who called himself the cash gifting expert.

His program was called “Too Damn Easy” and being the newbie I was online, I gave into his nonsense. Click here to see a full review on this scam. If you’d like to of course.

His site was very old and is actually still active. I’m not sure if people are still giving into this stuff, but the site does exist.

Back in the day, cash gifting used to be done through postcards. Give someone some money and then you can get your own postcards and send it out to random people on someone’s email list.

Back in the day people may have been skeptical, but they sure did give into it. Making money online was around, but nothing was as serious as what these postcards did.

From then, it went from a mixture of sending out postcards, to getting people to send you money directly to your Paypal account.

I’m sure people will do whatever it takes to get money from other people, but this is not even a legitimate operation.

Cash Gifting Has No Product

If you are still doing the whole postcard gig, that would be the only form of a product that you could say there was, but in reality, there is none.

What in the world would you tell the person that you are trying to get under you? Hey want to join me in my cash gifting business?

Well, let’s just say that that actually did work on me. So can you imagine how many other people have given into this stuff hoping that they make some money?

Pay me $25 and spread the world like you’re taught if you want to make money online. Can you say pyramid scheme?

Yup, This is a Pyramid Scheme

In the early days of this program, you will have those that get in early and then those that will be nothing but contributors to those that got in early.

So in order to make money here, you will need to get them to join. Unlike Amway or any other lotions and potions MLM out there, cash gifting has nothing.

Even a bottle of nonsense would work better than nothing, but that is what you can expect.

Cash Gifting Will Not Last

I don’t care if you’ve made some money with this, there is no way that it will last. If you’re thinking that this is going to be your golden ticket to financial freedom, you might want to keep your day job.

What people are trying to do these days is to create teams and promote it like you don’t have to do anything because you will be put into some type of rotator.

I recently reviewed Easy 1 Up and that is definitely a cash gifting scam even if its members try to tell you that it’s legit.

I thought cash gifting was slowly dying down, but there are still some being created. These days, most of these hustlers are tying to do cash gifting in the form of “revenue sharing”.

I have been apart of a couple of these types of businesses, and they actually did make me a good chunk of change.

Rather than not having a product, these owners used advertising packages as their product. In the end, they are all the same and one is not going to be better than the other, just because.

Stay away from anything that doesn’t have a product but still claims that you can make money. Whether it’s nothing but smoke in the mirrors or some type of phase, these programs are not going to help you.

If you want to make money online, you might want to checkout my #1 recommendation. With a whopping 90% that won’t make a single penny doing this, you can see how this is nothing but a bunch of hype.

What’s even crazier is the fact that people will defend these sites like it works, when all they’re waiting for is for you to gift them with some money.

If you’re a member of some type of cash gifting scheme, now is the time to give it up. You can go and get your few signups, but do know that you are wasting your time.

If you are still promoting this just so you can at least get your own money back, you might as well cut your losses and move on.

I have lost thousands of dollars online and even at that, I had to admit that I was involved with some of the biggest scams on the net today and move on to something legit.

Other than that, you have been warned. If you do decide to get involved with this, you are going at this on your own. There are no guarantees and at least you know what you’re getting yourself into.

What do you think? Is this legit? Is it worth your time?

How to Make Money With The Google Adsense Program
Next Post: Read This My Pro Traffic Review Before You Join