I am not apart of this site and I don’t plan on promoting it either due to my experience with private label rights type products and the whole idea behind it.

But what I will be doing in this article it researching this system and writing everything I find, because I’m sick and tired of scammers making a lot of money with their rubbish products.

So is this system really legit or just another fake, scam website that provides no value whatsoever?

I will be answering these questions and many more throughout this review, so let’s get right into it! 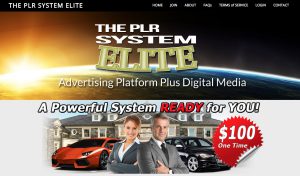 Price to join: $5 for affiliate fees, an additional $5 to be apart of the MLM program

About The PLR System

The PLR system has just released V2 of this system, and that’s because the first version went under.

They decided to find everything that went wrong with the first version.

After some reviewing and some tweaking, they relaunched the website with a version 2.

Why did the first PLR System go down? They were asking for money from their members and promising them at least 400% ROI.

But of course this never happened, the only thing that DID happen was them taking everyone’s money and not paying them.

So the entire company was running not JUST a ponzi scheme, but also a cash gifting scheme.

The company went down late 2015, but then came back with a total makeover of the website in August 2016.

Has Johnny Gan learned from his mistakes, will he actually pay everyone this time? So many unanswered questions that we need to find the truth about.

When affiliates sign up (after they first pay the $5 fee), they can then start promoting the Private Label Rights products.

These are banners, e-books, videos, etc.

However, you can’t really tell if these products are truly legit and if the author is actually allowing affiliates to market them.

There’s no chance for retail sales to happen with these products either, and that’s because they are tied to the affiliate membership, which means they can’t be sold to customers.

What does all this mean?

You aren’t actually making money from other people who are outside of the business, but rather with all the affiliate commissions from memberships and fees.

So the only way to make any money from this system is to pay a for a membership, and then an additional fee, then start recruiting people so they can do the same.

As I can clearly see, Johnny Gan has not learned from his mistakes and it seems the same business model and concept has been taken place.

Just like Xtreme Pro System where I got into it with him and he claimed his product was legit.

Let’s just say, I told you so Johnny.

There is a 3×2 matrix within the compensation plan.

And to take part of the MLM side of the company, you will have to pay another fee, which is anything from $5 to $700.

Getting referrals are gained from direct and indirect recruitment.

Here’s how it all works:

When an affiliate signs up, he/she will have to “gift” $5 to the person who recruited them in, then they can start taking part of the compensation plan.

When that affiliate starts recruiting more people into the system, they will gain $5 for each of them.

Basically, the more referrals someone can recruit into the same system as you, the more opportunity for money to be made.

But of course, it’s not as easy as it sounds and it never is.

Doesn’t Bring Anything New To The Table

Is The PLR system V2 any different from the old one? Not by too much actually.

In fact, the only difference is that there has been 4 tiers added in, along with an increase in payment amounts.

I’m going to have to say no, it is not different. Everything is exactly the same, with extra tiers and increased payments.

So obviously the owner hasn’t learned his lesson, and the exact same thing is going to happen again, resulting in the entire website getting shutdown.

And what will go with it? Everyone’s money that has been invested.

Who The PLR System Is For

If you’re already in the MLM business and know what you’re doing, meaning you know how to recruit a lot of people and get them to convert, then The PLR system could be for you.

That’s if you want to take an incredibly high risk though.

Otherwise I wouldn’t waste my time with it, especially because there’s a high chance of the owner not paying you.

To sign up with this system it is going to cost you $5.

However, there’s no way to even sell the products outside of the website, meaning you HAVE to take part in the compensation plan to make any money from this system.

This means you have to gift your up-line some money (anything from $5 to $700), and you will receive that back and more when you start recruiting people in.

So is The PLR System a Scam?

Sorry Johnny, but your latest product is nothing different from what you’ve created.

As much as you try and create something that makes other people money, I will never trust anything you produce.

I’d be surprised if this goes another month before it gets shutdown.

I have bought into Johnny’s marketing before and this is nothing new.

You can give into another one of his schemes or you can see what I recommend here.

There aren’t many legitimate ways to make a living online but that is one of the few that I know work.

So if you want something that will actually make you money, that is one of the few that I know will get you to making something on the internet.

Other than that, thanks for reading my PLR System Elite review.

If you have any question about this or any other make money from home “opportunity” feel free to leave it in the comments section below.

I hope this review has been helpful to you in one way or the other and hopefully you can decide for yourself.

Prize Rebel Review – Is It Really Worth It?
Next Post: Future Net Review – Recruiting Scam In Disguise?