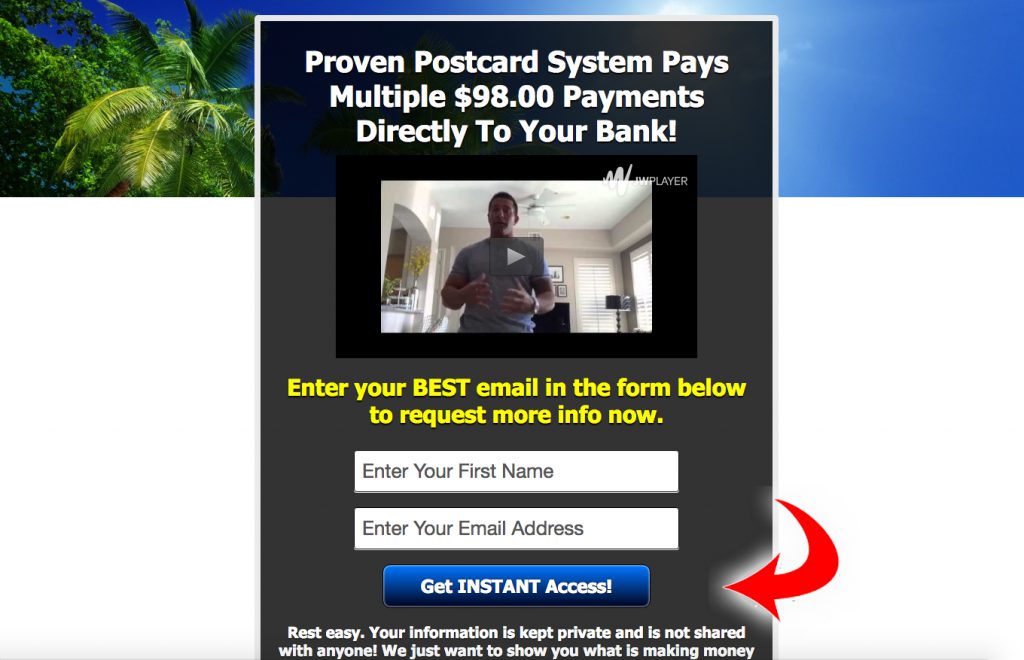 I’m sure you’ve seen this landing page or something like it and immediately wondered if it was a scam. This Instant Postcard Wealth review will give you all the information you need so that you can make a better decision on your own.

By having postcards in the mix, it seems like you’re doing something completely legal, which is why a lot of people are really thinking about joining this.

But how in the world could you possibly make money sending postcards?

Are postcards really that expensive?

I’d like to break everything down so that you know exactly how it works before you fork out any money and most especially waste your valuable time with something that might not even be legit.

Website: www.postcardstowealth.com (along with many other personal sites promoting IPW)

Yet another make money sending out postcards program, very similar to Too Damn Easy, which claims to make you money by doing exactly that.

The name of the program is Instant Postcard Wealth but they are promoted through other sites like Postcards To Wealth, which sells the same product.

You get 24 different postcard templates as well as some other bonuses just for joining whatever team it is that you decided to join.

It doesn’t matter what or who you join from, they all use the same marketing tactics with the same bonuses that will end with the same company, which is Instant Postcard Wealth.

The process is really simple like they say and it really baffles my mind how this thing is still going on up until this day as they were very common in the 90’s.

Have you ever joined some type of MLM program or any type of recruiting based business that had you purchase something before you can make any money?

You may feel like you’re paying for postcards, but that’s really just a way for you to repeat the same process you just took in order to get started.

Yup, you just gave money to the person who brought you in and you are about to do the same exact thing.

The program uses hyped up marketing although they claim not to, when they clearly have pics of money and fancy cars on some of their marketing, just like the one  below.

Contradicting and flat out dishonest marketing that I really thought didn’t exist anymore, but I guess I was wrong. 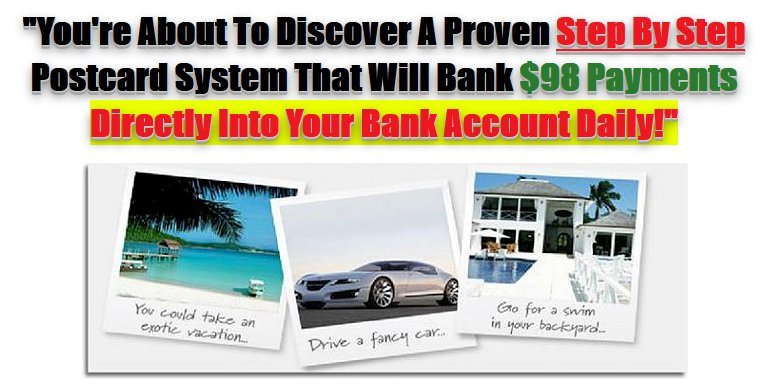 A big part of their marketing comes with YOU making $98 over and over again, which I’m sure got you seeing dollar signs.

Want to know how you can make that type of money?

Pay that same amount in, to be able to “resell” the program and you’re set to go.

Then of course you would have to pay $.35 for each postcard you send out, in which they want you to send to 100 people from their list, which will come out to $35.

Don’t forget that you will have to pay that same $98 every month in order to be able to resell it, as well as a $59/year admin fee, which I’m sure goes to the creators of this system.

You will also be hit with a couple of up-sells, which gets you other “products”, but that’s just another way for the person above you to make more money.

Oh and all you really get are templates for these postcards, so you would have to print them out on your own before you start sending and that’s another added cost.

So Can You Really Make Money Sending Postcards?

Of course you can and you can really make money doing anything, but that doesn’t make it okay.

As long as someone did the same exact thing you just did, (give your money to the person who sent you the postcard) you can very much make money doing it.

You see guys, it is not the postcard or any product you are selling, but rather a recruiting based program that only makes you money if someone joins under your link (the “personal” website they give you).

In the world of scams and schemes, that is what they call cash gifting.

Give your money to someone else and then have someone “gift” you next.

That’s how these things work and yes, it is really that simple.

Not the most legitimate way to do things, but that’s how these types of sites operate.

So is Postcards To Wealth Legit?

This is really depends on your perception of things, but I wouldn’t call it a scam.

Back in the day these things would work, but people are just too smart nowadays.

Sure you’ll have those desperate ones (I used to be one) that will give it a try simply because they want to make money, but it’s not going to be as easy as they make it seem.

Not going to call this a scam, but definitely not recommended.

I have tried this type of stuff before and there are a lot more of them out there, so don’t think that you’ve found “the one” that is going to get you out of the rat race.

I thought this would actually work since I was giving in, but I couldn’t make a single sale with it no matter where I sent the postcard to as people are not going to buy something that they don’t even know where it came from.

There are many lessons I’ve learned in my online career and doing the postcard thing was a hard one to let go, because I put a lot of money into it and couldn’t cut my losses.

After realizing what I was really in, I threw in the towel and again, fell for other things that promised me money and of course ended the same way as my postcard run.

But Guess What? I Finally Found a Way!

Making money from home is a great thing if you DON’T play the recruiting game.

After joining many programs trying to make something work, I finally found a real online business that didn’t require me to recruit anyone in order to make money.

Thanks to a program called the Wealthy Affiliate I now make my living online selling other people’s products through a business model called affiliate marketing.

Without that site, I really don’t know what I’d be doing.

Then again, I’d probably be trying to recruit you into my pyramid scheme or something like everyone else, but I’m glad that’s not the case.

Anyways, thanks for reading my Instant Postcard Wealth review and hopefully I have painted a brighter picture for you so that you can really make a better decision.

If you have any questions about this, feel free to leave them in the comments section below and I will get back to you within 24 hours.

7 Reasons Why I No Longer Use Godaddy For My Website Needs
Next Post: You Can Definitely Make Money Writing On Fiverr.com, But It Might Not Be Worth It