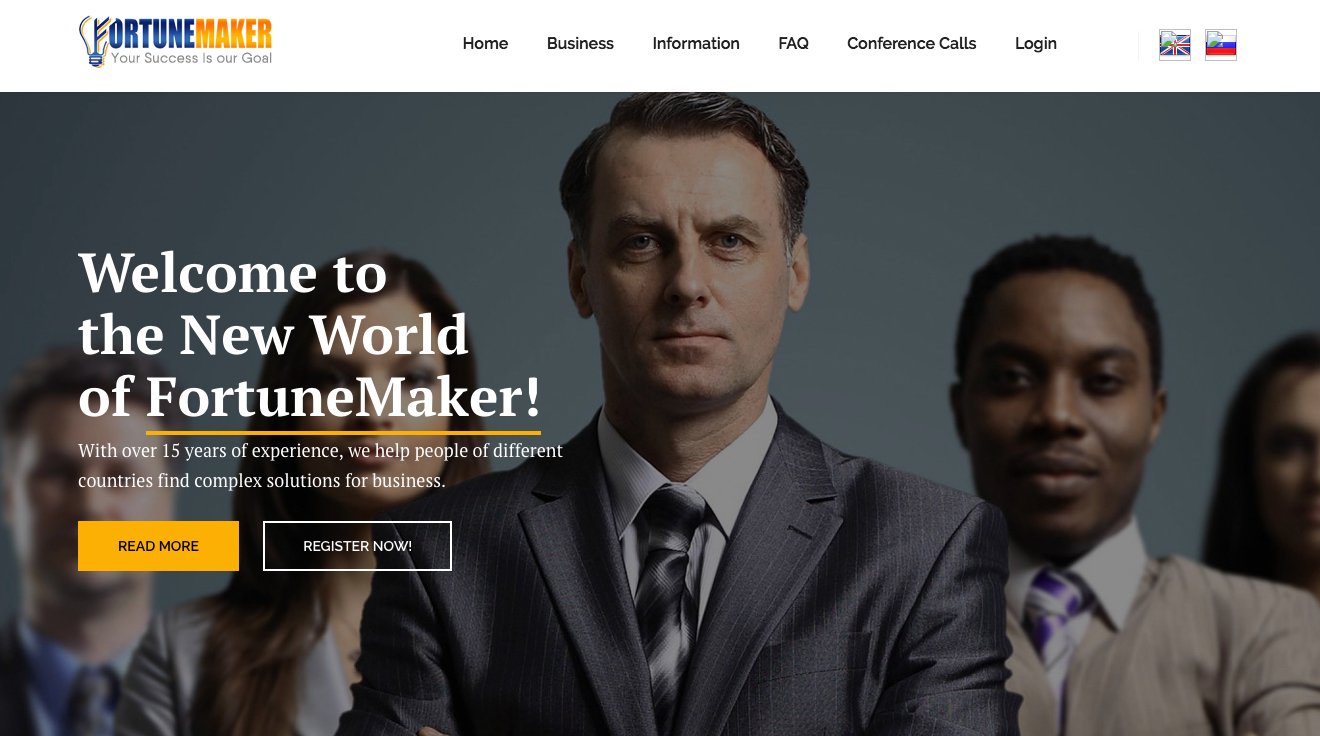 Fortune maker which is found at fortunemaker.biz is a website that claims to make you money by simply joining and not recruiting a single person.

At least that’s what they advertised.

I personally don’t like joining programs that will only make you money if you get others to join but with that not being mandatory, I had to at least give this a try.

Then again, everyone tries to make the same claims, so I had to pump the brakes and do my research before joining something I might end up regretting.

So before you join, see what I dug up so that you can see what you are getting yourself involved with and if in fact you don’t have to recruit anyone to make money.

The first thing I look at when I get introduced to any make money from home program is their actual product.

With Fortune Maker (just like any other recruiting based program), there is no tangible product but rather an advertising/branding platform with a bunch of the word “sponsor” that follows.

Before proceeding further with this review, let me just tell you that I have had my run with these so called advertising programs, so I know exactly how they operate.

For me, I was introduced to this as a way to make money and not just that but without having to recruit a single person.

Just like any other program I review, I at the very least give them a benefit of the doubt no matter how obvious things may seem.

It didn’t take much digging to justify conclusion but here is what you need to know if you do decide to give in to the person who introduced this to you.

So I tried to put the whole “no recruiting” thing to the side to see what was really offered here and it seems that the advertising is their main product.

In the world of making money online, selling advertising is nothing more than what we call revenue sharing.

And all that means is that money is generated by the funds from its new members.

So in order for anyone to make money there needs to be new members joining at a decent rate.

And if no one joins then guess what?

No one makes any money.

Now what I do want to explain is how the whole no recruiting thing works.

“Recruiting is optional” but of course there is still that incentive for anyone who promotes the company.

In other words, these are the people that will be fueling the money engine.

What most people get drawn into is the crazy figures that they show on the site, which they refer to as “the million dollar matrix”.

I have seen this type of stuff too many times before so this is definitely nothing new.

They get you to see these crazy numbers and tell you that you can make money without recruiting and voila!

For the very affordable price of $30, who in the world would not at least give this a try?

I almost try every single one of these because one, I have to pay for something or I can’t really say much about the program or two, I really want to see if I can even make back at least the money I just put in.

In the end, I am at a 100% fail rate as not a single one of these has ever worked and it doesn’t seem like this will either.

So Will Fortune Maker Really Work?

Everything you see on paper looks like the best idea and also possible but that’s about where it stops.

Everyone will join trying to get in early so that they can be apart of the little group at the top but let me just say that we are all thinking the same exact way.

Now how do I know that this won’t work?

I did this thing called math.

If you even take 3,000 people and you take the money that they put in, what will that give you?

I say only not because that is a little money but because 100k is a lot of people and I don’t even see 10,000 people joining.

Will that even make one person a millionaire?

So before you start thinking that you will be making money through their awesome compensation plan, you might want to do the same math I just did and you will see that it is impossible for even just 2 people to make a million dollars.

I really feel that this is a complete waste of time but I guess I can cover the basics.

When you join Fortune Maker you will be thrown into their 3×6 matrix, which means that you are only allowed to earn 3 levels up and 6 levels wide.

Forget about the whole no recruiting thing as this whole site is geared towards your recruiting efforts.

I do want to cover the fact that there are other options that need to be funded in order for you to make the big bucks they speak of but of course you will need to recruit in order for that to happen.

Now these other levels will be automatically paid by your earnings, so you will need to get to recruiting or your matrix will not move anywhere.

That’s about all you need to know here as you will definitely not see an income without getting others to join under you.

Now if you want to learn more about that, you can see that here.

Other than that, I don’t see the point in explaining something that means nothing to every single one of you that were presented with this as a way to make money without recruiting.

How in the world does this even make sense?

If you really sit back and think about how everything is done with Fortune Maker, you will see that this is nothing more than a recruiting based program that most will consider a ponzi scheme.

There are no real products or service here and everything is based on how many people actually get into the program.

There is no value whatsoever and all you are really selling here is a bunch of hype and dreams.

Things might seem legit but this is the next ponzi you need to avoid.

At the very least, I give these guys props for at least having some type of person to represent the company but you can almost bet that they are from outside the good old United States as this type of stuff does not fly here.

With the banning of USI-Tech and the shutdown of Digital Altitude, it seems that some people will never learn.

One after the other, there will be another make money from home with digital currency, advertising, or some other method but none will last.

When a company thrives on the recruitment of others that is never a good sign as far as making money online is concerned.

I know people that have been trying for years to make one of these programs work but they have still not learned their lesson.

If you want to make money online you might want to try affiliate marketing or something but if you have to talk to someone to make money, you might very much be involved in a ponzi scheme whether you know it or not.

Even the top promotors of these schemes are getting sued so stay away from this to avoid any type of issues in the future.

But I do hope that this Fortune Maker review has given you a better understanding of how everything works as most people will just join because $30 is very much affordable.

If you didn’t put in any money, I advise you not to and if you already did, let’s just hope that you at least get back what you put in.

I also don’t recommend you go out there claiming that this is legit when you really didn’t make any money like most members are doing.

So please do your part and don’t contribute to making the people behind this site more money because that is really the only ones benefitting from this.

With the claim that you can make money without recruiting yet be the only way that the company makes money just doesn’t make sense. All we have here is another recruiting based website that you need to avoid. Unless you feel like making the owners more money, this is one of the many sites exactly like this that you need to avoid. I would really like to give Fortune Maker zero stars but I just have to give them credit for putting together the nice website that their program sits on.

Make Money From Home as a Pet Sitter – How Does $500 a Week Sound?
Next Post: How to Land a Customer Service Job From Home For $15 an Hour