Home » News » Does the End of My Paying Ads Mean the End of Revenue Sharing? 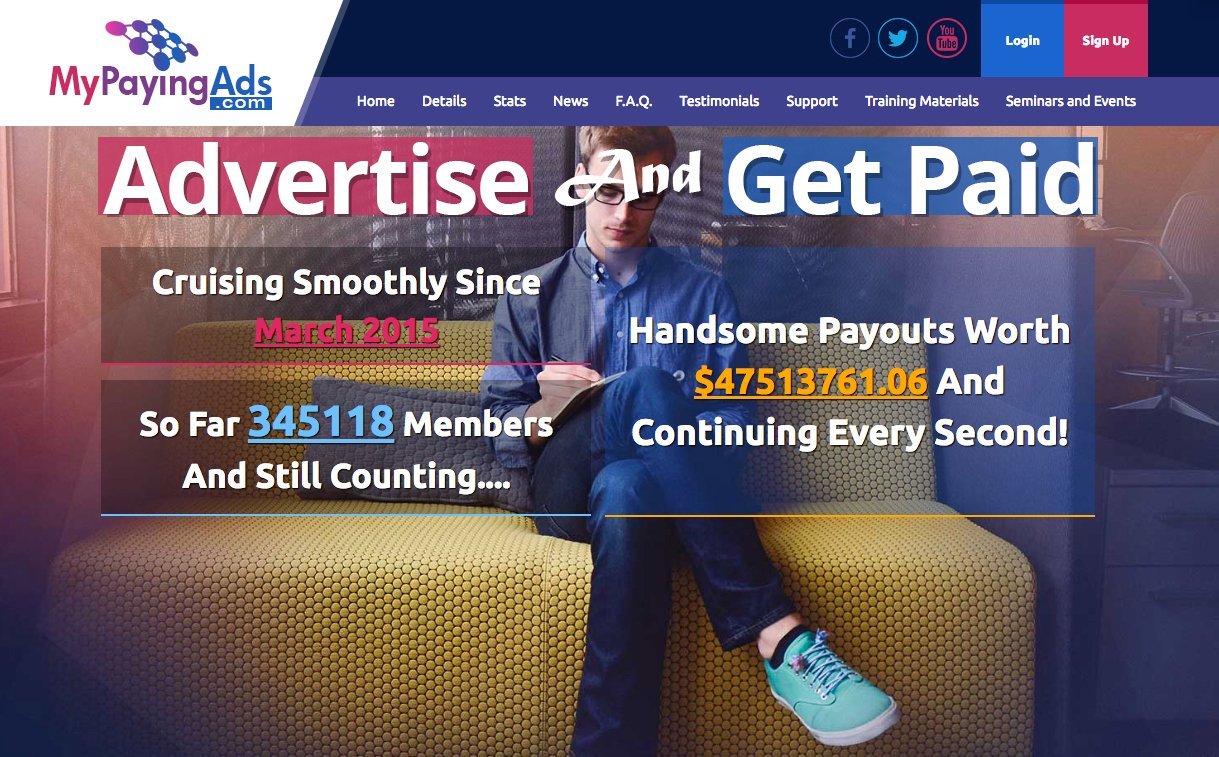 My Paying Ads has been around for quite some time now and it still has some of its members confused and lost.

After 2 years of paying its members, is the longest lasting revenue sharing program finally hanging up their jersey?

I have been a member of My Paying Ads since the beginning (March 2015) and although I did put in a good amount of money, I was waiting for the day that recruiting slowed down and the program stopped paying its members.

After getting my initial investment back within a month’s time, I was certain that the site would crumble shortly after, but I was completely wrong.

Week after week, month after month, I was earning every single day and I was still waiting for things to at least slow down, but it didn’t.

After 2 years, My Paying Ads is Finally Gone

Fast forward two years of consistent earnings and an administration that was beyond helpful, the site has finally hit the end of the road.

After negotiations with its members, they have come to the conclusion that the only solution to a huge drop in referrals was to stop everything and give people their money back if they weren’t in profit.

My Paying Ads is officially gone and with the millions of dollars that were dished out in profits alone, it’s actually really sad to see something like this go away.

Now where does this leave everyone?

Either looking for the next best thing or simply quitting this as a whole due to the riskiness of the business model.

Revenue Sharing is NOT Designed to Last Forever

My Paying Ads lasted for a very long time, which I’m sure not even the owner could believe.

The thing about this whole business model, is that it isn’t designed to keep going, even if we wanted it to.

Uday Nara is an honest man, but not even that is enough to keep a revenue sharing alive as there is just not enough fuel.

Being funded majorly and almost solely by new members, that is the reason revenue sharing will never sustain itself and that’s just how it is.

Once earnings start slowing down, it will cause panic and confusion, causing everyone to withdraw their money.

The end of My Paying Ads was inevitable, but it’s also something that we should’ve seen coming anyways.

I’m sure there were thousands of people who made a good profit, but just like any program like this, there is always going to be someone to lose.

I have been apart of many revenue sharing type programs and cyclers that left me in the negative, but I knew exactly what I was getting myself into.

If it wasn’t for the Wealthy Affiliate, I really don’t know what I’d be doing right now.

Will There Ever Be Another Revenue Sharing Program Like My Paying Ads?

I don’t think so.

First it was Traffic Monsoon, then My Advertising Pays, and now the last of the big three is finally throwing in the towel.

There have been many sites that came and almost immediately disappeared, but not one of them can seem to pass the 6 months mark.

As far as the click on ads daily type of revenue sharing programs are concerned, let’s say goodbye to probably the only type of program that paid its members for almost doing nothing.

Bitcoin MLM is In

You might not find revenue sharing programs like you did two years ago, but what you will see are the thousands of Bitcoin MLM type programs that are very similar.

No actual products with recruiting being its main and probably only source of income, but minus the whole clicking of ads daily.

More like a cash gifting type of program, but it is very much funded by new members.

Forget about hiding behind advertising, these guys want it even easier.

What’s bad for this is the fact that not only will it not last, but it will go down a lot faster than we think.

Be Smarter Than Most

The owners of these Bitcoin type  MLMs are also operating outside of the US, so that’s why they are able to have something like that.

What most people don’t know is that they’re trying to make a quick buck.

Have others promote their program, make some type of money, and bam!

Shut the doors on everyone.

So if you see any site that promotes Bitcoin and recruiting, you need to avoid them at all costs as they are doing nothing but trying to take your money.

Revenue Sharing Will Never be the Same

It was crazy enough for me to put a lot of money into something I don’t believe in, but I guess you can say I had a good feeling about My Paying Ads.

Now that they’re gone, I don’t see anything coming close to what Uday and his team has accomplished.

I wouldn’t join another revenue sharing program as I’m sure it will never be the same.

With something like affiliate marketing around, there’s really no need to try and bank off of new people’s money.

So just like My Paying Ads, I’m throwing in the towel.

I will no longer promote revenue sharing or any other HYIP for as long as I remain an online marketer.

It was great while it lasted, but it’s time to say goodbye to the last of the revenue sharing world.

It’s back to hard work and dedication.

For those of you thinking about getting involved in revenue sharing, I have 3 words for you.

Goodbye My Paying Ads and good luck to you Mr. Uday Nara!

Club Fast Coin Review – Worthwhile Investment or Scam?
Next Post: Will My Hit Buzz Be a Big Hit Or a Big Scam?