The questions won’t stop until this whole site either makes everyone rich, or the actual scheme flops. Is Phoenix Power Rising a scam? It’s free to join, how is it even possible?

Avoiding scams online is a big part of making that first dollar and sites like Phoenix Power Rising has all the tall tell signs of one and I would like to educate you on another too good to be true scheme.

For those of you thinking you have nothing to lose, this is most especially for you. For those that are still in doubt, this is still for you.

Read along as I explain to you exactly how these types of sites operate so that you can avoid scams like this if for some odd reason you happen to come across one again.

Here is my Phoenix Power Rising review, which will give you everything you need to know before you even signup for something so free.

What is Phoenix Power Rising?

A site created by Terri Petty, which can be found at www.phoenixpowerrising.net. I am not going to insert my link there because I don’t want or need to get you to signup for something that I consider a waste of time.

The program is supposed to be a cycler, but even at that it is not promoted as such. All people are brainwashed with is the fact that you pay nothing and “make money”, which is who will be promoting  this.

Mind you that every single cycler out there is a scam, no matter what anyone tells you. So keep that in mind the next time you come across a program that has the word cycler in it.

Who This is Intended For

The uneducated, desperate, and anyone looking for a free ride. That amounts to almost everyone I know online, and that is also the reason why you have so many people promoting and praising something like this.

Get one desperate member of this promote it on their page or to their list and you can expect this to spread like wild fire. I have seen too many schemes like this so just know that this is not the first of its kind.

Think about it. It’s free, they have some crazy story, and they have the nice little “pay it forward” nonsense to work in their favor.

If you read their “testimonials” you will see the exact people that are involved here. They can’t even speak straight and they claim to make money when that money is not even in their bank account. 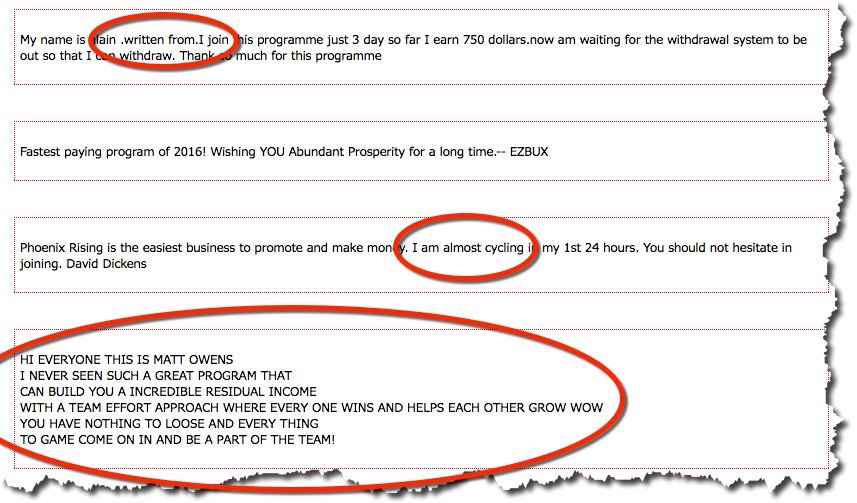 So How Does The Scheme Work?

It doesn’t. No one will be making money but the owners and everyone is just too blinded by the fact that you don’t have to pay a dime to join.

Everyone will promote it like they already are and when the time comes for people to get paid, they will realize that the $750 they see in their back office is nothing but a number.

For those of you that are a little smarter than most people, start your own business and earn it the right way. Don’t make the owners a single penny like everyone else is.

There is no product with this, but they do use the whole advertising nonsense just so they don’t get shutdown. No product means scam and that is why they use something digital.

How about the preferred shopping system? That is nothing but a way for them to try and make money by having its members use their affiliate links before they make a purchase.

More like more members means more money for us. I can only imagine how many people have joined this because of the fact that they pay $0 out of pocket and you really can’t blame them either.

I have nothing to lose, so why not give it a try, right? That is exactly what 99% of the people are thinking before they join something like this.

Yup, it sure is free. To top it off, you make money by getting people to join under you and guess what? They don’t have to pay either.

Do you really think they can pay each member to join at $120 a head? Think about it for a second and maybe even pull out that calculator for a second.

If there were even just 1,000 people in this, that would mean that they have $12,000 ready to pay out to its members. Mind you, there are way more members and there are way more “earnings” that people have accumulated within just a week of its start date.

If this is not too good to be true, then you might be infected by the hype that the site and its members bring, so go get yourself checked.

The one positive review I found of this site comes from someone who has no idea what he is talking about. He claims that everyone and their mothers are making money, but there is no actual proof.

Everyone “Making” Money, but No One Getting Paid

Just like expected, everyone will see money in their account, but no one will ever see a dime in their actual accounts.

Just like a site called Up-Survey, they have you recruit a bunch of people and show you hundreds of dollars in your account, and then no one actually gets paid.

Yes, there will be money in your Phoenix Power Rising account, but when it comes time to paying EVERYONE out, you can be certain that they won’t have enough money.

But, The Owners Saved For This

This is just as good as believing one of those “Hey! You’ve won a million dollars, just give us your bank account info so we can deposit it for you”.

No one saved any money for anything and these people are doing exactly what everyone is trying to do here and this is to make money.

So falling for their claims will only help fuel this scam. You are doing nothing but wasting your time as well as assisting the owners in giving people false hope.

Be Smart and Avoid the Phoenix Power Rising Scam

I know, it’s all over Facebook and wherever else it is, but just be even a little smarter than most. Making money online is not going to come in the form of some PIF type program and it isn’t going to happen just like that.

Just like they mention right before you join, “click below today and join in on the FUN”. That is all this is, besides the fact that these scammers will make money off of a lot of desperate people.

There are thousands of people that hangout on Facebook all day literally hoping and praying for money to land from the sky.

You can either continue to be one of them or you can get out there and make something happen. Within the 2 years of my short online career, I have managed to make a solid income every single month.

Did it happen with some type of cycler scam? Of course not. Although I can honestly say that I have given into this type of stuff early in my career.

Click here to see the same exact program that I use and will probably never be beat. You will have to work, but the results are absolutely amazing.

Most people will disagree with my Phoenix Power Rising review because of the cold hard facts, but I challenge anyone of you members to show me some proof of your earnings.

I don’t want to see your back office of your PPR account, I want to see your actual bank account. Let’s just see how many of you are really making money with this. This should settle the argument once and for all.

Be Your Own Boss and Become an Online Business Owner
Next Post: My Paying Ads Review – Updated and Ready for 2016