Revenue From Advertising is another matrix based ponzi, which claims you could make $640,000 with a single $50 investment, which I’m sure got you curious and landed you on this review.

I’m sure those figures made your eyes come out of their sockets as well as turn on your scam radar, which is great for you, unlike others that jump into this stuff without doing their research.

Being in the business for quite some time, I got a little confused with the whole advertising thing, being that I have a lot of experience with revenue sharing and these make money with advertising type sites.

After watching one of their sales videos, I finally figured out exactly how Revenue From Advertising works, so if you’re looking for a solid, unbiased review on this too good to be true program, you have come to the right place.

I’m sure its members might not like what I have to say, but the truth needs to be told or you might just have a bunch of unhappy campers who will be doing nothing but paying the people at the front of the line.

What is Revenue From Advertising?

Revenue From Advertising is a 2×6 forced matrix MLM based program that claims you will make $640,000 with a one time payment of $50.

The site uses advertising as its product, with there really being no actual product, but a matrix promising to make its members thousands of dollars.

There are no tangible products nor are their any digital products but rather an “advertising” platform, which I’d like to cover more on so that you understand things better.

Sure the site talks about advertising, but they fail to really explain what it’s really about, simply because that’s not what this site was built for in the first place.

Unlike revenue sharing programs like My Paying Ads that uses advertising as an actual product, Revenue From Advertising has its main focus on making money.

Both work the same exact way though, as money is only generated by having new members come into the program, but Revenue From Advertising will only be paying those at the top, rather than everyone.

So about those ads…

Let’s just say they are nothing but a front, from what looks like a cash gifting/MLM type site, which is already off to a rough start.

How Revenue From Advertising Works

So we already know that in order for anyone to make a single penny from this site, there needs to be new people joining at a really high rate or people will not only stop joining, but current members will jump ship.

Revenue From Advertising likes to use something they call PDDS (Powerful Dual Downline Structure) and from that nice little sales video, it sounds very, very possible.

Using PDDS, you are able to join for just $50 and get your first 2 downlines and so on, using this PDDS formula.

You are limited to so many people in your downline, which will cause something called spillover, causing other spots in your matrix or other people’s matrix to fill, again, using PDDS.

Recruit more people while having your first positions filled and they will go down into your downline’s matrix or any other spots that aren’t filled in yours.

Well, there’s a lot more to it and I’ll be explaining that more in the comp plan, as well as how you can make that $640,000 that they advertise.

The math seems fairly simple and with the way that it’s explained in the video, it makes you think that you can and will make that money regardless of what you do.

Another big marketing tactic you see on their website is the “only pay $50” and you can make $640k, which I will be getting into here shortly.

Do keep in mind that the PDDS remains in effect for all packages, so you will only be allowed to have a certain amount of packs before things start spilling over again.

Of course there are “ad credits” that you will receive, but this is nothing more than a way to offer some type of product or you can bet that this thing will be shutdown faster than when it started.

Sure everything sounds legit from what we’ve seen so far, but do some simple math and you will see how hard it really is to pay just one person $640,000.

Now whether you use PDDS or whatever software you want, it is almost impossible to pay just 1 person that much money even if you already had thousands of people joining this site.

It just doesn’t add up.

I literally sighed before talking about this because it really  has me thinking “here we go again” because I have heard this type of stuff from many other scams in the past. 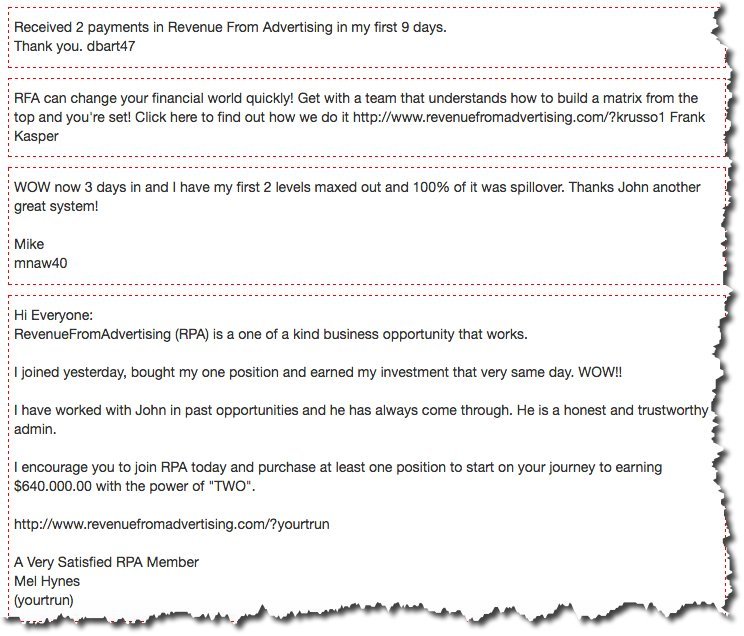 If you visited the testimonials page for Revenue From Advertising, you will see that people are actually making something within the site.

Well I’m sorry to say but there’s just not enough people to fall for this stuff to get to the numbers they claim on their site.

All you see are “you need to join” type nonsense, which is not a testimonial, but rather another recruiting strategy that people that already paid are using just so that they can build their downlines.

So is Revenue From Advertising a Scam?

Sorry to be the bearer of bad news (or good, depending on how you want to look at it), but this site is nothing but a ponzi scheme scam that will not pay you the type of money you thought.

Good luck even trying to make $1,000 because once people feel the site slowing down, they will just take whatever they made and run, causing the PDDS process to fail.

Revenue From Advertising sells a dream and the only real winners of this site will be the people who got in early, which I’m sure consists of the people on the good old testimonials page.

I usually tell people to join a program at their own risk, but I have to be flat out blunt with this one as it is not a legitimate website.

DO NOT JOIN REVENUE FROM ADVERTISING, no matter how curious and desperate you get.

Forget about thinking that “it’s only $50” either because you will be doing nothing but making these scammers money.

Put that money into creating a real online business and don’t waste your time paying for someone else’s dream when you can invest in yourself.

As much as I try to see the good in any program I review, it’s really hard to see anything good coming out of Revenue From Advertising no matter what way I look at things.

I actually thought this would be something legit, but after really getting into things, there is no way even 10 people will make that much money no matter what happened.

Do not join the Revenue From Advertising scam and do not promote this just so you can make money if you are one of those that fell for this.

Thanks for reading my Revenue From Advertising review and hopefully I have painted a better picture of how this site actually works before you throw away that hard earned money of yours.

Please do spread the word if you see anyone trying to promote this ponzi scheme on social media like everyone is already starting to do.

To whatever it is that you do next, I wish you nothing but the best.

Tired of Scams? See What Program I Recommend Here!

Poke Lazy Is A Scam And No One Is Getting Paid
Next Post: What Is The Ideal Length For A Blog Post?