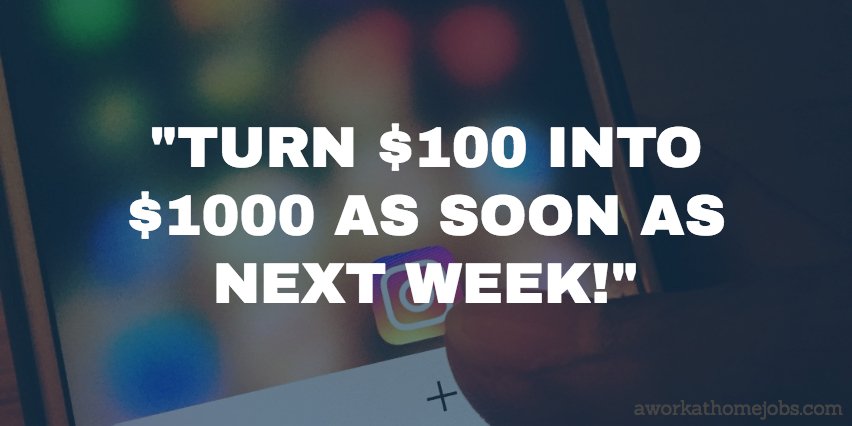 You can almost immediately tell what this is about but for those of you who are new to this, let me shed some light on the gray areas that come with this territory.

Whatever the case may be, this is something you need to be aware of as I’m sure we all have dollar signs in our eyes and with proof, who wouldn’t give in?

Now that all the crypto currency ponzis are down and out, the latest craze seems to be cyclers.

Back in 2014 when a program called the Achieve Community got shutdown, I was almost certain that I would never see another cycler again.

Well, I was wrong.

I guess after everything kind of disappeared slowly, some people thought it was the right time to start it up again and this time they have taken it to Instagram.

For those of you who know nothing about making money through any social media outlet or online for that matter, let me just give you a little lesson on what you are about to get involved with if you do decide to give into one of these too good to be true posts.

Let’s just say that I have been apart of several of these types of programs in the past and I have actually “made” some money but I most especially have tried losing it.

In the end, I was an actual loser in the mix but at the very least, I understood what I was actually involved with.

So for those of you wondering if this type of stuff is legit or if it actually works, please follow along as this post won’t be long but it will definitely give you everything you need to know.

I’m sure some of you have already thrown money into one of these programs as the person who introduced it to you is probably someone you know personally.

Now just because they tell you it works, does not make it legit.

Now let’s get down to the bottom of this before you waste your hard earned money or most importantly your valuable time, as I’m sure you could be doing something more productive, like affiliate marketing or something.

So What’s the Deal?

The way these things work is really simple and it goes something like this.

The first person who got into that cycle will be the first to “cycle out” and that is done by getting more people to join.

So for one position to cycle out, you will need 10 people in order for that to happen.

Once that is done, the next person in line will move up and if there is already 10 under them, they will cycle out too.

So if you’re following along so far, you will know that people need to keep joining or no one will cycle out and this is how it’s done.

About That Payment Proof

The person who is introducing this to you will most likely have been paid but don’t let that make your decision.

I’m sure a lot of you probably don’t care how things are done as long as you get paid but that needs to stop.

Every other person who is involved with this nonsense is thinking the same exact thing that you’re thinking.

What will end up happening though is that people will get greedy (because that’s how it is) and eventually someone will stop the cycle causing a whole bunch of people to lose $100.

Now even if they don’t get greedy, having 10 people to every one filled position is not an easy task, so eventually you will have thousands of people who are waiting to get cycled out when in reality, they won’t.

Another thing that people end up doing is creating their own cycler just to get their BFF and their BFFs to the top of the cycle so that they can guarantee they get paid before anyone else.

On top of that, they will buy multiple positions just so they can make a huge ROI, which will leave everyone else that is not in the know to fund everyone that is in this club.

Don’t be that person.

Someone Has to Lose

At the end of the day, someone will never see that $100 again.

And by someone, I mean some thousand someones who were just gullible enough to believe that good friend of theirs, who was just trying to follow the instructions from the people running this scheme.

It all sounds legit, people are getting paid, so there’s no way this can be a scam, right?

That’s what they want you to think so that you all can put in money to keep these cyclers going.

By having some type of disclosure that isn’t even accepted in the US and an affordable price, the people that lose will most likely cut their losses and figure that they just had to see if it worked.

Please don’t do that as there are people making thousands of dollars off of people like you and others that are thinking the same exact thing.

Everyone and their mothers (literally) are looking for a way to make some extra cash as the bills are piling up and your income is just not cutting it.

Invest in some crypto currency ponzi scheme or do some money flipping?

With the two biggest scams out there, it kind of makes people think that everything online is a scam when you really have no one to blame but yourself.

If you follow the simple rule of “if it seems too good to be true, then it most likely is” you won’t be contributing to the scam artists behind this nonsense.

Get with the program and I don’t mean some money flipping site either.

If you want to make money online, it is going to require the right training, some hard work, and most especially the right mentality.

Making a thousand dollars tomorrow is the perfect mentality to keep you in the rat race, so if you can’t get past that, then you will always fall for scams and never make the type of residual income that the 1% are actually making.

I don’t care who introduces it to you, these cyclers you see on Instagram need to be avoided at all costs.

I hope you have gained a better understanding of how they really work, so please keep that $100 and put it into a real online business or something.

You can also read more here on the same program that has allowed me to work from home for the past 4 years but other than that, you have been warned.

How to Make Money Online Without Crypto Currency
Next Post: Review: What is Internet Jetset Really About and Will John Crestani Scam You?