So there is a lot of “I don’t know what that is” floating around when someone mentions the name UFUN. Within this review, I want to show you a little more on what this very unique business is all about and whether or not you should join UFUN or buy into the UToken.

Ufun is a product developed by Mr. Huang back in 2012 and is an MLM network marketing opportunity that operates based on your investment into its uTokens. Concisely stated, it is more of an investment opportunity into its own cryptocurrency, which many may actually call a ponzi scheme. But whether or not this is an opportunity that can make you money is what this review is all about.

The UToken is nothing more than a digital currency, which is very similar to something called the Bitcoin, which started in 2009 and created several millionaires, pretty much overnight.

Who This is For

This is definitely not for conservative people. If you don’t have the money to invest, this is not going to be the program for you. Then again, it’s going to cost you a lot to join.

Your daily earnings from each purchased uToken however, fluctuates on a daily basis. Therefore, your earnings can rise sky high one day, but completely plummet the next. In a way it is very similar to the way other HYIP products work, and is based on the current amount of money being spent by its members. This will cause payouts to rise and fall on a daily basis, and can be considered to be a highly risky venture by most.

It is going to cost you a minimum of $500 to get into UFUN. On top of that, it is not going to be as easy to pay as you think. You’re not just going to log into Paypal and expect to get in just like that. It is a lot more complicated than you think.

You can join uFun at one of different five level investments:

The more money you invest, the higher your income potential with the company as well as the risk.

Despite the complexity of the compensation plan, many believe this is used as a mere ploy to attract interest and get individuals to spend more money. With levels starting at just $575 reaching all the way up to $57,500, this may be true.

There are currently five UFun Club packages available you can purchase that are referred to in the order of number of stars.

Compensation within the uFun Club will therefore rely upon you investing into the company as an affiliate. Prices range, and start pretty high.

By purchasing an investment package, you will be deemed eligible to purchase and receive a level of uTokens as follows:

Your level of investment will moreover, place a cap on your maximum daily earnings: 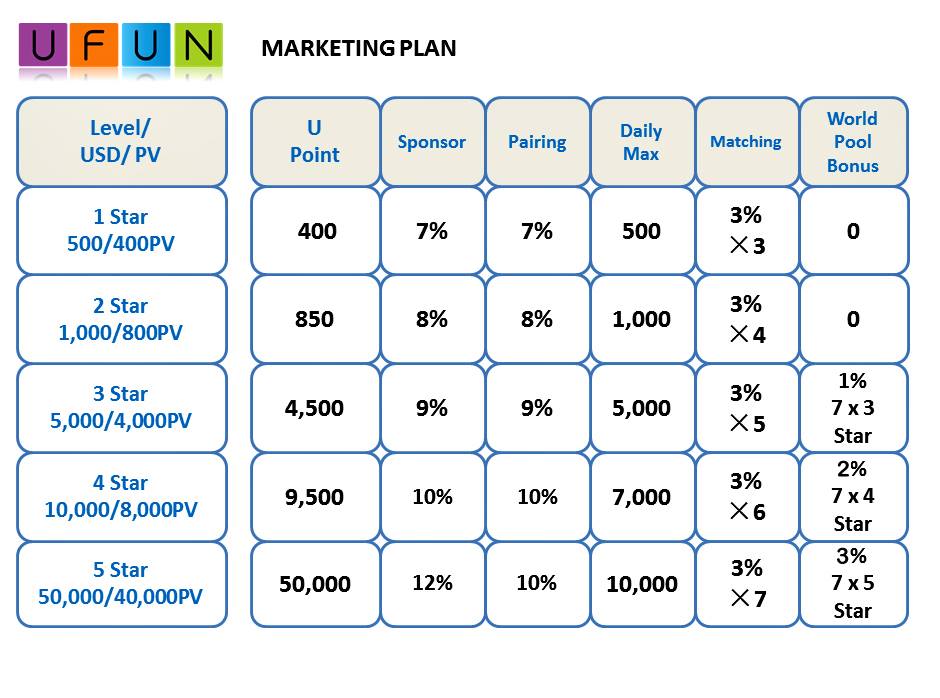 The Recruiting Side of Things

In addition, many Ufun members are known to make money primarily through the number of their referrals.

Here’s how it works:

Your commissions from referrals are dependent upon how much you have invested, which in-turn will correlate with the amount of commission you make. Each one therefore has a corresponding percentage attached based on the investment level that they make.

Therefore the only way you as a uFun affiliate can make a higher income is to invest more money within the company.

The amount payable is also determined by how much your referral has invested:

Now the last way to earn a commission using uFun, is by bilateral commissions. This is a binary structure that places two positions under each affiliate allowing for a left and right side of the binary. The point values are similar to the previously mentioned uFun referral compensation structure.

* Again, here your earning percentage is based on what level star you have invested in.

Overall Rating: Join at your own risk!

This is more of an investment and I see the MLM side to be an incentive for its members to bring in other people.

And unlike most of todays MLM’s the company takes a unique approach by simultaneously offering a method of investing (similar to todays HYIPs) as well as way to begin making a residual income through referring.

Another unique aspect is the fact that it uses uToken as its main product line. This is nothing more than a made up currency, which operates based on how many people are buying into this. The fact there is nothing physical to it is what really adds some skepticism to the overall methods used.

Can you make money with uFun? With investment plans reaching up to $50,000 I would hope so. But like most of todays HYIPs, the risk is definitely there. Earnings will be volatile and there really is no say how long it may take you to recoup your investment costs.

All in all, if you are looking to invest in uFun, my recommendation is to start slow, and gradually work your way up if things are going smooth.

If you’re simply looking for a way to make money online, I suggest you use programs like Wealthy Affiliate, which is what I used to create my work from home business.

I am very well invested into UFUN and only because I see opportunity. If you don’t have the money, of course you can’t join.

Well that’s about it. Thanks for reading my review of UFUN and good luck!